About Us
Contact Us
Distributor / Rep Locator
Pecora Calculator
MENUMENU

Known as one of the most recognizable houses in the world, Frank Lloyd Wright’s Fallingwater has graced the covers and pages of Time and Life magazine and was featured in a traveling exhibition by the Museum of Modern Art (MoMA) in 1938 and a second exhibition in 1939. Located in Bear Run, Pennsylvania, and built in 1937, the nearly 1,600 acres and future home of this breathtaking structure were owned by Edgar Kaufmann and his family. Bear Run is situated in the Appalachian Mountains with sprawling water, rocks, and greenery which ultimately became the inspiration behind the design of the house. “The natural beauty surrounding Fallingwater is intimately connected to the understanding and appreciation of the house itself. The genius of Frank Lloyd Wright to physically and spiritually embrace the natural world is captured in the daring and innovative architecture set among the forest landscape of Bear Run” (fallingwater.org).

The house is placed over a beautiful waterfall “in a stacked grouping of cantilevered concrete ‘trays’… Although the house rises move than thirty feet above the falls, the strong horizontal lines and resulting low ceilings reinforce the safe sheltering effect Wright sought to achieve…Stone floors continue out onto terraces, corner windows that open outward to ‘break the box,’ and expanses of plate glass that frame nature through its four seasons” (fallingwater.org).

Having been built nearly 80+ years ago, maintenance is necessary in order for future generations to revel in the gorgeous architecture. Fallingwater is an all concrete building that houses the glass of the windows in a concrete frame directly in the mortar. The windows were originally not designed for movement. Due to the natural shifting of the landscape, the house moved, and the glass broke causing yearly replacement of windows. A window restoration company was hired to sand, repaint, and seal the windows. Unable to perform the sealant application themselves, Director of Preservations at Fallingwater, Scott Perkins, reached out to Pecora Western Pennsylvania Sales Representative, Sharon Vietmeier for assistance.

Sharon traveled to Fallingwater and met with Scott as well as the president of Architectural Preservations Studio, Pamela Jerome. Architectural Preservations Studio is a historic preservation and building envelope consulting firm located in New York City. Together, they established the scope of work needed to complete the project while ensuring approved products and repair procedures would be followed. After examining the windows, Sharon determined the best course of action would be to contact contractor, Advanced Caulking Services (ACS) to inspect the windows and perform the caulking. “I feel strongly that a highly qualified experienced caulking contractor should be used for this historical project. With that being said, Advanced Caulking, Glenn Stroupe would be my first choice,” said Sharon.

Located in Pittsburgh, Pennsylvania, Advanced Caulking Services is a commercial caulking contractor founded in 1997. With over 25+ years of caulking experience, ACS owner Glenn Stroupe has worked on numerous 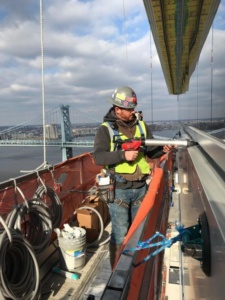 projects across the country including Penn State University, Aloft Hotels, Flight 93 National Memorial, Consol Energy, and the Space Shuttle Museum. Advanced Caulking Services’ employees are highly skilled in various types of caulking applications and are especially skilled in window, curtain wall, and metal panel work. Glenn says, “with our 30+ years of professional history along with my expertise in caulking, I knew Sharon and I would determine the best solution to repair the windows of Fallingwater.”

After surveying the broken windows and taking into consideration that the glass was built right into the mortar, Glenn suggested to leave a quarter inch of space on either side of the glass for the sealant. By creating this open space, ACS was able to construct a joint between the mortar and glass allowing the windows to move naturally and prevent breakage. Ultimately, Glenn’s solution provided future cost savings for Fallingwater.

As a Pecora advocate, Glenn recommended the use of Pecora 890FTS-TXTR

as a sealant solution for the newly designed joints. Glenn stated that the textured option in the color Natural Stone would be an identical match with the mortar already established on the building. Pecora’s custom color lab also matched the color Tan to be applied around the window and other areas throughout the building. Glenn purchases Pecora products for a lot of his projects, and states “I have worked on 30+ custom color projects that require color matching and I use Pecora for these jobs.”

After the project was completed, Architectural Preservations Studios reached out to Sharon stating, “we are so thrilled about the Pecora non-staining sealant that has been used at Fallingwater, we are recommending that we upgrade our office standard specifications to feature Pecora products.” The pillars of Pecora’s success is the belief in building long-standing relationships with companies like Advanced Caulking Services, coupled with the commitment of developing technologically advanced products. ACS’s mission statement is, “to maintain our reputation of highest quality workmanship, performed by a respectful and knowledgeable staff.” This is a statement Pecora also lives by, stands behind, and will always support.

Make estimating the amount of sealant needed, for a wide range of projects, easy with Pecora's help. Use our convenient sealant calculator.

Choose one of the Calculators below:

XL-Flash - Window Openings
XL-Flash - Sheathing Seams and Penetrations
XL-Perm Ultra VP
XL-Perm Ultra NP
ProPerm VP
To use: Enter values and press "Update" to recalculate. These calculators also update when you tab to the next field or click elsewhere in the page.
We use cookies to ensure you have a great online experience. By using our website, you agree to our Cookie Policy.Ok